The essence of Underground, Spiritual Jazz, figuratively and literally: their first album was recorded in a Boston, Mass. church’s basement.

Both World’s Experience Orchestras albums were recorded in and around Boston, Massachusetts in the mid to late 1970s and committed to vinyl in miniscule press runs by a visionary, bassist/composer/arranger John Jamyll Jones. Jones is a magical type, who communicates with his instrument, his ensembles, and jazz’s ancient lineage in a manner so profound that his late-‘70s album are out of time with jazz’s trajectory, but timeless when presented today. By the late ’90s the music of World’s Experience Orchestra was circulating throughout the collections of esoteric jazz fans, the likes of Gerald “Jazzman” Short and Gilles Peterson, who played “The Prayer” for those, the Coltrane-enthralled searching for something new, something different. Something spiritual and honest. 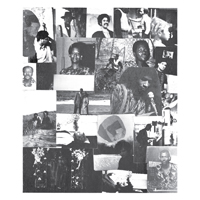 Peterson first offered to reissue “The Prayer,” as part of an anthology he was putting together with Los Angeles reissue label Ubiquity Records and that, to date, is the only official issue of any of Jones’ music. This set is the definitive catalog of Jones’ ensembles’ released work. “I knew it was going to happen, but I didn’t know when,” says Jones of the road to seeing his music re-issued. “It’s 35 years or more now, and I’ve been waiting for this, and I’m quite sure I’m not the only one.”