You might think that a certain bad-hair-having, shit-talking presidential candidate is obnoxious, but there’s one man who would definitely be more dangerous in the White House: Dolemite. Traffic Entertainment Group is proud to reissue this hilarious and downright filthy album to celebrate the mud-slinging we’ll all be experiencing this fall. And, of course, to remind the world of Rudy Ray Moore’s unique comedic genius.

The album’s lengthy first cut, “Campaign Speech,” is worth the price of admission alone. Ranting for ten minutes straight, Moore lets it all hang out, with every bit of profanity he can muster. It’s certainly interesting to hear some of his words more than four decades later. “I’m not promising you a chicken in every pot,” he bellows, in his trademark raspy scowl. “I’m not promising you a God-damn thing. If I am elected, I promise to legalize prostitution, marijuana, stealing, and every other motherfuckin’ thing you want to do.” Making fun of Nixon, George McGovern and Spiro Agnew, he continues, “We’re still waiting for that 40 acres and that motherfucking mule.”

Towards the end, he brings forth a metaphor that, interestingly, would come true in the year of Moore’s passing, 2008: “The next thing I’ma do, I’m gonna move on my first act. I’m gonna get me 2,000 raggedy-ass painters, and paint the motherfucking White House black!” The rest of the album’s 13 songs are equally loud, offensive, funny and even – when the audience isn’t expecting it – serious. With a live soul group grooving behind him and a live audience yelling support along the way, he gives his fans what they want on cuts like “Dance Of The Freaks,” “Long Island Duck,” “Farting Contest” and “Chester & Mr. Dillon.” 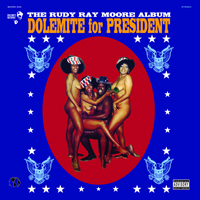 Released on black vinyl with its eye-catching original front and back artwork, it’s a great way to relive the comedic bravery and brashness of a truly unique man, Rudy Ray Moore.