In 1971, an eccentric and peculiar LP of psychedelic garage rock found its way into the hands of a scant few Los Angeles music publishers. The record was titled Heitkotter, and though it was dismissed largely as uncoordinated guitar fuzz noise at the time, the album's reputation has grown into legend among record collectors. Originally pressed in an extremely limited run of less than 25 records, the album has been hunted and sought after by crate diggers the world over, all while retaining a unique air of mystery and enigma that few other records shared.

The Heitkotter from the title referred to the record's brainchild: Stephen David Heitkotter, the former drummer for the Fresno garage group Road Runners, and a casualty of the 1960s. As the Vietnam War took off and the draft broke up Road Runners, Heitkotter managed to avoid the draft showing lingering signs of mental instability. By the time the 1970s hit, he took up painting and visual art, (Taking up the post-hippie moniker of "Black Orckid") had overdosed on speed twice, and showed more and more signs of paranoid schizophrenia.

It wasn't long before the career drummer picked up a guitar and recorded Heitkotter with a childhood friend who hadn't played drums in 4 years, and a novice 16-year-old bassist. The resulting sound was akin to tonal chaos. The kind of music a man slowly losing their mind would create. The sound of the 1960s slowly burning out, with subtle inflections of blues rock jamming thrown in. The album was pressed and distributed to friends, family, and a few music publishers, who soundly rejected it. As the years rolled on, Stephen grew more and more unstable, until finally he was declared ward of the state, confined to an institution for mental illness to this day. 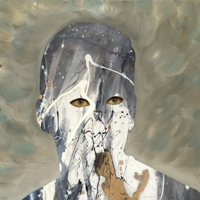 With the assistance of Stephen's brother William, Now Again Records has brought this legendary album back, as a deluxe reissue on vinyl and compact disc, and under the new title of Black Orckid. In addition to Heitkotter's original 6 tracks of unhinged psychedelic frenzy, Black Orckid features additional demos that have been unearthed from long-lost reels as bonus tracks, all of which feature restored/remastered audio. The collection also comes bundled with a multi-page booklet featuring essays, and unpublished photos and images. An exceedingly rare artifact from an unsung outsider genius.