It has been 10 years since Statik Selektah’s long awaited first official studio album landed, and now it’s available for the first time on vinyl. Red vinyl too.

It features a bona fide ‘who’s who’ in Hip Hop from underground celebs like Skyzoo, Termanology and Reks, to legends like Kool G Rap, KRS-One, AG, Q-Tip (A Tribe Called Quest), Joell Ortiz, Freeway, Cormega, Royce 5’9”, AZ, Large Pro, M.O.P., Slum Village, Alchemist, Evidence, and more.. “Spell My Name Right (The Album)” has something for everyone, with street anthems (“G Shit (Showoff Mix)”), underground bangers (“Did What We Had To Do”), straight battle raps (“Time To Say Goodbye”) and even the long forgotten DJ song (“No Mistakes Allowed”). East to left coast, ALL the big dogs show up for this one, with all production by Statik Selektah. Receiving support from DJs worldwide, Kay Slay, Funk Master Flex, Clinton Sparks and DJ Khaled to name a few, Statik has risen to an elite rank with his DJing and production skills, and is set to release his 8th solo album later this year. he can be heard producing for the likes of Action Bronson and Eminem, and on his weekly radio show on Sirius/XM ‘Shade 45’ (Thursday Nights from 8PM – 12AM). 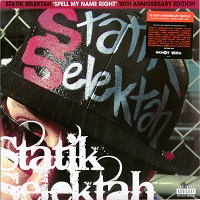