One can’t speak of California’s famed desert rock movement without mentioning the visionary producer/musician Chris Goss. The so-called Godfather of the Joshua Tree-centered scene, Goss has produced famed and acclaimed albums by groups like Queens Of The Stone Age, Foo Fighters, Kyuss, Screaming Trees, and numerous others. Before he was known as a renowned producer though, he was the singer/guitarist, and only consistent member of one of the most influential-yet-forgotten hard rock groups of all time: Masters of Reality.

Masters Of Reality (Whose name was appropriately taken from a Black Sabbath song) had the distinction of being the only group signed to two different hip-hop labels of historical note: Def Jam and Delicious Vinyl. Originally label mates with Public Enemy and Slayer, Masters Of Reality’s self-titled debut album was released by Def American in 1988. Two years later, Delicious Vinyl founders Matt Dike and Mike Ross, huge Masters fans, bought the band’s contract from Rick Rubin and re-released the album with new cover artwork to renewed acclaim and commercial success. 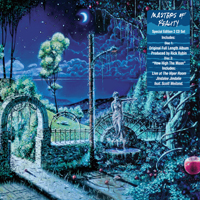 So many years later, Masters Of Reality’s debut still feels like a hard-hitting breath of fresh air in a modern landscape of over-produced rock music. It’s in this sense of tribute that Delicious Vinyl presents this re-issue of the acclaimed record. The audio has been re-mastered, and its original “Blue Garden” artwork has been restored, while Rick Rubin’s hard rock production chops shine bright, and blare loudly in equal measure, on highlights like the foot-stomping “John Brown”, the frantic live-staple “Domino”, and proto-stoner pieces like “Doraldina’s Prophecies” and “Kill The King.” As an additional bonus, this CD set comes bundled with a second disc, featuring their live recording How High The Moon. The album was recorded at the famed LA rock venue The Viper Room, and features a riotous selection of live MoR renditions, as well as an appearance by the late Scott Weiland (formerly of Stone Temple Pilots & Velvet Revolver) duetting with Goss on the track “Jindalee Jindalie”.