Between the twin pillars of “Cloak and Dagger” and “Blackboard Jungle Dub”, the superlative, yet often overlooked, “Rhythm Shower” album was also released in ’73. Originally issued in a very limited Jamaican pressing with no sleeve, it became better known when re-released by the Trojan label as part of its 3 LP, and later 2-CD set, The Upsetter Collection, first issued in 1986.

Despite its obscurity, “Rhythm Shower” is a pivotal album in Perry’s career as a producer and bandleader; it finds him beginning to experiment with dub and developing his singular studio sound that would come to full maturity in subsequent years.

Whereas earlier albums offered plenty of instrumental versions, on “Rhythm Shower”, Perry really begins employing the studio sleight of hand that would become part and parcel for what was then the emerging art form of dub — dropping voices and instruments in and out of the mix to create a trippy, hypnotic effect. Not to go unnoticed is the mighty Upsetters themselves, whose revolving crew of musical heavyweights included Bob Marley & The Wailers future rhythm section Aston “Family Man” Barrett on bass and drummer Carlton Barrett. The powerhouse rhythms they forged give Perry all the space he needs to work his mojo at the mixing desk. 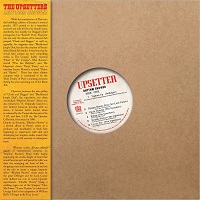 With one foot planted firmly in the celebrated sound of the time and the other stepping assuredly into the future, “Rhythm Shower” is essential listening for any fan of Reggae, Dub or Lee Perry. This is crucial music. This is classic Scratch.