“Songs of Experience was supposed to have a different feel than Song of Innocence. You see, music is a great outlet. And regardless of what the titles say, and as close as I wanted it to be to
William Blake, what was going on in my life took precedence.”

Songs of Experience is visionary composer/arranger/producer David Axelrod’s second album; it was recorded after the death of his beloved son Scott. Experience is an ominous affair, an album concerned with mortality and spirituality – the solitary, pastoral musings of William Blake set to the urban bombast of a full Los Angeles orchestra, with Wrecking Crew vets grounding the proceedings with dark funk.

This is the next Now-Again issue in a series of reissues centered around Axelrod’s Capitol Trilogy – Song of Innocence, Songs of Experience and Earth Rot – which will see release through 2018. Contains an extensive booklet that delves into Axelrod’s incredible life and music, replete with never before published photos. 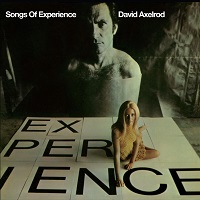 “There are very few people who see the Grand Picture of the Universe and understand the Nothingness that it all comes from. There are even fewer who can express these ideas through
music – David could do it all.”