Connie Price and the Keystones are the Los Angeles musical group whose 7” releases kick started the Now-Again label way back in 2002 – and whose Wildflowers album was the first full length release by a new band on the label. Way back then we called it “cinematic soul” and wouldn’t you know it – the originator of the style, Lalo Schifrin, himself agreed. Seriously. Read the quote above. It’s real.

Wildflowers contained contributions by the Heliocentrics’ producer/drummer Malcolm Catto and Poets of Rhythm/Whitefield Brothers/Karl Hector & The Malcouns founder/guitarist Jay Whitefield. Now that Now-Again is the home to the previous ensembles and more (artist albums by Seu Jorge, Chop, Fabiano do Nascimento and MRR-ADM have come out on the label), it seemed fitting to revisit where it all started, with an expanded version of the album that kick started it all. Includes previously unreleased Malcolm Catto tracks and tracks previously only available on out of print vinyl. 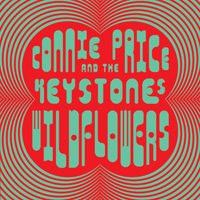 “Those seeking an un-ironic return to the classic days of jazz and funk, played by a group of live musicians who swing and churn with the best of the old-school need look no further than this album by Los Angeles-based Connie Price & the Keystones…Bandleader and drummer Dan Ubick (aka Connie Price) leads this gang of players through a score of horn-filled, groove-heavy originals that easily sound like they could have been laid to tape 50 years ago, with Ubick’s jazz-infused boom-bap offering a contemporary swing gleaned from hip-hop as well as classic soul. Muted horn riffs fuse with loose jazz guitar and an ass-swaying drum break on “Tall Day Grass” that was made for smoking filterless cigarettes on the front porch, while opener “Sticks & Stones” incorporates a reggae-tinted groove, with dub-worthy bass, ska horn punches, and vibraphone hits that chime through the low-end swell…Here’s hoping this dirtier time in musical history brings with it all of the nasty funk that accompanied it the first time around.”