Augustus Pablo (given name Horace Swaby) was born just outside of Kingston. “I am a Kingstonian,” he told the NME in 1986, “but my heart is for the hills.” This mystical connection to “the hills” is at the heart of Pablo’s unique and immediately identifiable sound.

By the late ’60s, Swaby and his brother Dougie had founded a small sound system they called Rockers. The brothers spent a lot of time in record shops, including Aquarius, where owner Herman Chin-Loy heard Swaby experimenting on his melodica and was struck by the inspiration to record. The resulting tune was credited to Augustus Pablo, a name that Chin-Loy invented, as the story goes, to give an air of mystery to the release. Pablo recorded two more singles soon after with “Java” becoming a major hit and being voted Instrumental Song Of The Year by Jamaica’s Swing Magazine. This success led to the Randy’s label moving to create a full-length album from Pablo.

Recording in the Randy’s studio upstairs from the record shop “we weren’t watching the clock…we had the studio,” Clive Chin recalled. The band included a cast of the greatest reggae musicians of all time: future Wailer Tyrone Downie on keyboards, Aston “Family Man” Barrett, “Fully” Fullwood and Lloyd Parks on the bass, Carlton Barrett, “Santa” Davis and Lloyd “Tin Leg” Adams were on drums and Earl “Chinna” Smith played guitar. In addition to these future Hall of Famers, the mixing board was helmed by Errol Thompson. Thompson and Chin would together pioneer a tough, new reggae sound that, Chin referred to as “Rockers” after the Swaby brothers’ Rockers Hi-Fi sound system. 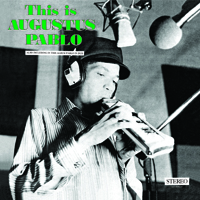 For this issue three songs contemporary to the first release of This Is… have been added: the original single version of Pablo’s hit, “Java,” and two cuts issued as B-sides to successful Clive Chin-produced records. “Guiding Red” and “Marabi.” Augustus Pablo sadly passed away in 1999. “He was 46,” his obituary stated, “and lived in the hills outside Kingston,” where his heart belonged. His music has endured and continues to inspire. This Is Augustus Pablo is considered among the greatest collections of Jamaican instrumental music and is an essential part of reggae history.

– Culled from the liner notes by Andrew Mason