A staple of the modern underground hip-hop scene, Queens rapper Meyhem Lauren owes much of his sound to that of the halcyon days of the 90s East Coast scene. Over the years Meyhem Lauren has worked alongside veterans and revered figures as DJ Muggs of Cypress Hill, Madlib, Freddie Gibbs, Czarface, Sean Price, Roc
Marciano, J-Love, and his childhood friend Action Bronson, with whom he frequently appears in the Vice TV program Fuck, That’s Delicious. 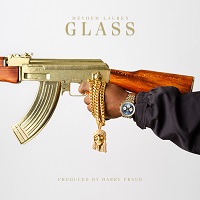 Now he and producer and frequent collaborator Harry Fraud have teamed up to release Glass, their nine-track collaboration and instant classic. Glass showcases Meyhem Lauren at his best, with production by Harry Fraud and features from the likes of Action Bronson, Westside Gunn, Conway, Big Body Bes, and Hologram, every track on Glass will be in heavy rotation on your playlists.